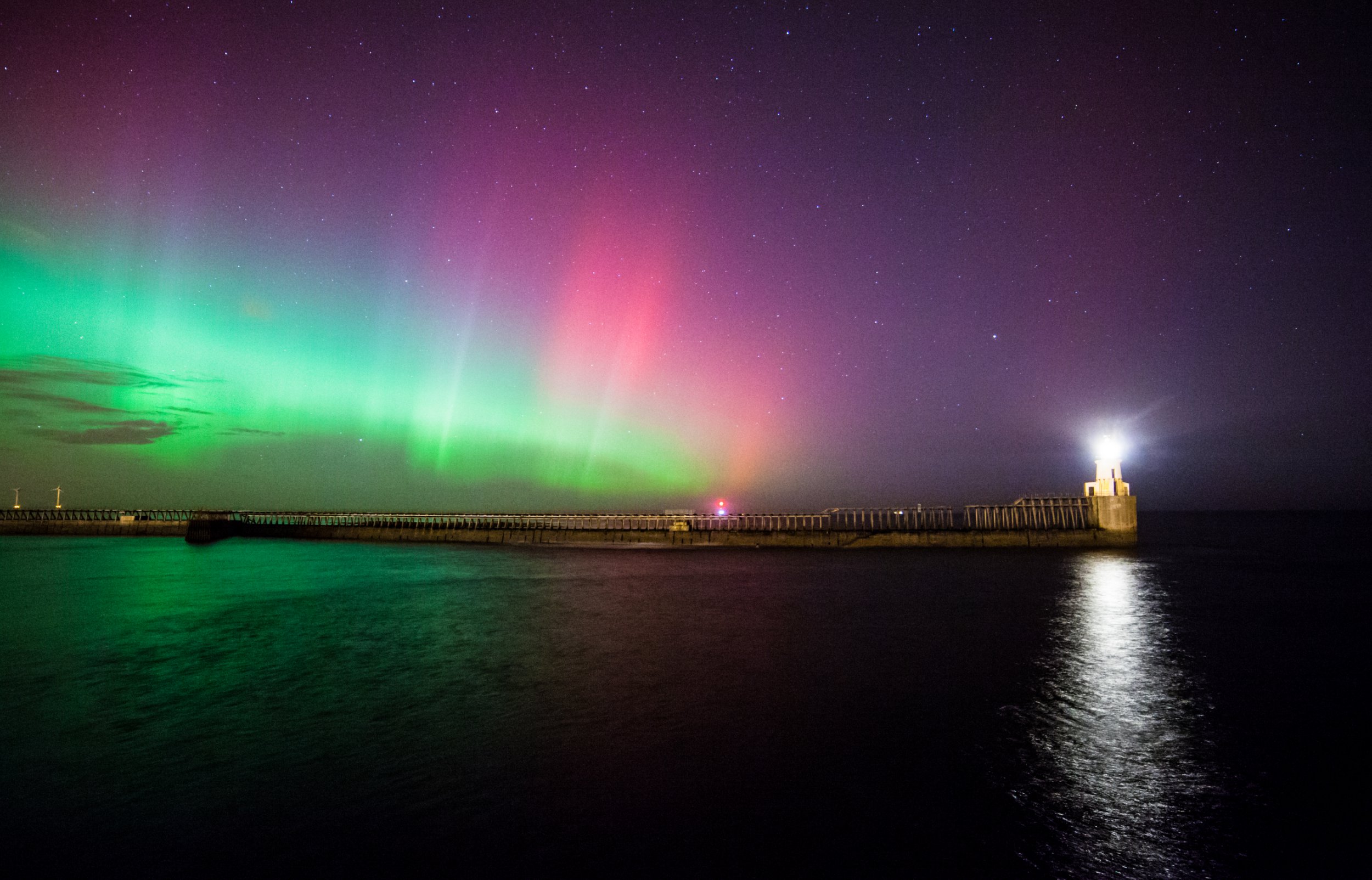 An earlier view of the Northern Lights over Blyth Harbor and Lighthouse on the Northumberland coast. (Credit: Getty)

On Friday, a huge filament of energy and matter burst from the sun’s surface — and it’s been hurtling toward our planet ever since.

This explosion of solar radiation reached our planet early Tuesday, causing beautiful light shows in the skies over North America.

Conditions could intensify again into a minor solar storm on Wednesday and Thursday, according to the US Space Weather Forecast Center.

Ahead of the storm, space weather expert Dr. Tamitha Skovo tweeted on Monday: ‘Direct hit! A snake-like filament launched like a large #solarstorm while in the Earth-strike zone. NASA predicts impact early July 19.

‘Powerful #Aurora shows possible with this one, deep into the mid-latitudes. Amateur #radio & #GPS users expect signal disturbances on the night side of the earth.’

direct hit! A snake-like filament launched like a large #solarstorm while in the Earth-strike zone. NASA predicts impact early July 19. strong #Aurora shows possible with this one, deep into the mid-latitudes. Amateur #radio & #GPS users expect signal disturbances on the night side of the earth. pic.twitter.com/7FHgS63xiU

Storms of this intensity can have minor effects on power grids and satellites, but they pose no threat to life here on Earth.

On the planet’s surface, our atmosphere shields us from much of the radiation from solar storms.

That’s not to say intense storms still can’t hit us. Satellites don’t have the same protection, so solar storms can affect them. That means the Earth-based systems that rely on satellites could be vulnerable to space weather.

Skywatchers in some parts of North America have been treated to incredible auroras as geomagnetic activity has intensified in recent days, many of which have been captured in stunning photos and videos.

In Seattle, Washington state, residents enjoyed beautiful green and lilac ribbons of light in the sky.

Residents of Summit, South Dakota were treated to two stunning weather events at once, when a bright aurora in one part of the sky coincided with lightning from a storm in another.

North of the US-Canada border, patches of bright green lit up the sky over Carseland, Alberta.

Also in Alberta, the town of Alix had a particularly bright display of purple and green lights.

Although they are known to coincide with solar activity, scientists have been baffled for years about exactly how auroras form.

But last year, American researchers finally came solved the puzzle. They determined how the sun’s activity can lead to the natural light.

They think solar disturbances can pull on Earth’s magnetic field and cause ripples called ‘Alfvén waves’. These waves shoot fast-moving electrons into the atmosphere — and it’s these electrons that produce the spectacular, eerie lighting.

MORE: Solar Storms Destroy Technology — But Scientists Have Found a Better Way to Predict Them