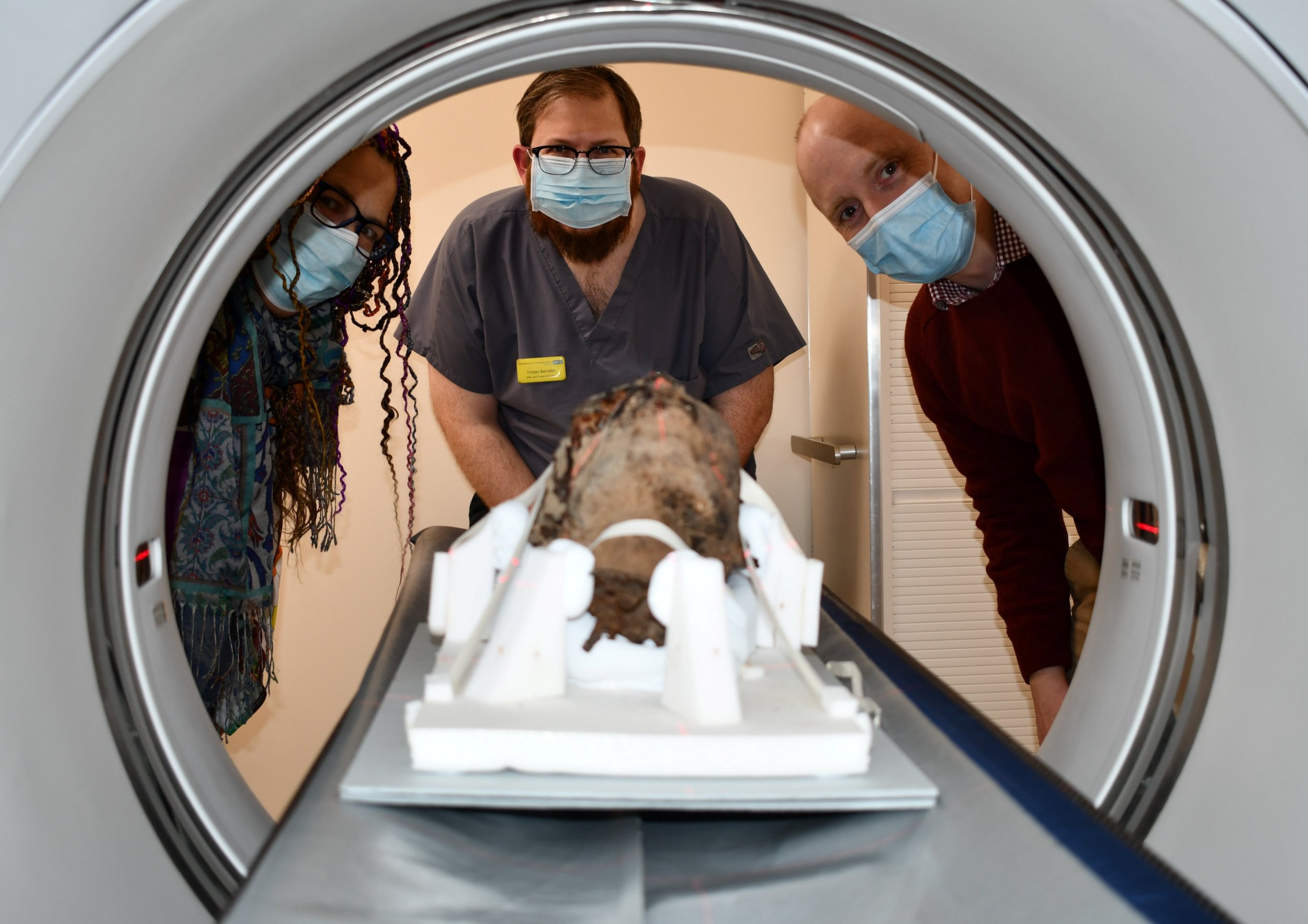 Please enable JavaScript to view this video and consider upgrading to a web browser that:
supports HTML5 video

The head of a headless Egyptian mummy discovered in an attic in Kent has undergone a state-of-the-art CT scan to try to uncover its secrets.

The head, which is at least 2,000 years old, is said to have been brought to the UK as a souvenir from Egypt in the 19th century and given to its owner in the early 20th century.

It was discovered in a glass case during a cleanup following the death of a man in Ramsgate.

The head, minus any casings or body, was inherited by the brother of the man who took it to Canterbury’s museums and galleries.

Initial X-rays taken at Canterbury Christ Church University suggested it was an adult female, but a detailed CT scan was arranged to learn more about the individual.

Preliminary results of the scan, performed at Maidstone Hospital, indicate that the brain has been removed, the teeth well worn from a rough diet and the tongue is remarkably preserved.

There appears to be a tube of unknown material in the left nostril and in the spinal canal. It is not known whether this is of ancient or more recent origin.

The team eventually hopes to recreate the mysterious mummy’s face and reconstruct the individual’s hidden history.

The scan was led by James Elliott, senior radiographer at Maidstone and Tunbridge Wells NHS Trust and also a lecturer in diagnostic radiography at Canterbury Christ Church University.

Elliott, a forensic radiography expert with a background in archaeology, said: ‘During Victorian times, such items were brought back from Egypt as souvenirs and may have been passed down from generation to generation to the owner. .

‘The scan yields an enormous amount of information – everything from dental condition, pathologies, method of conservation and aiding our estimates of age and gender.

“We plan to use the scan data to create a three-dimensional replica of the head and possible facial reconstruction to allow for a more intensive study of it without exposing the actual artifact.”

Preliminary scans indicate that the brain has been removed, the teeth have been worn down from a rough diet, and the tongue shows remarkable preservation. (Credits: MTW Hospitals/SWNS)

After being donated without any details as to how it came into the possession of the deceased owner, very little was known to be overlooked.

A CT scanner is most commonly used to identify and diagnose conditions, including broken bones, internal organ injuries, and stroke.

It can also help determine the location, size, and shape of a cancerous tumor before radiation therapy.

Craig Bowen, Canterbury Museums, Gallery Collections and Learning Manager, said: ‘The head was found by a man who inherited it from his brother.

‘It is believed that the brother got it from a ‘Dr Coates’ sometime in the early/mid-20th century, but we don’t have more details than that.

“Since Ramsgate had no museum when the lord brought it to us.”

Mr. Elliott explained how mummification was a ‘common practice’ in ancient Egypt, but with the advancement of CT technology, more details can be explored about ancient Egyptian traditions.

He continued: ‘From 3500 BC, mummification was seen as a way to protect the spirit on its journey to the afterlife.

Mummification was common in ancient Egypt for commoners and royalty alike, though with varying levels of complexity and associated richness.

Ironically, the ancient Egyptians believed that a person’s spirit was held in their heart and paid little attention to the brain.

Either way, the brain was removed to preserve the individual.

“While traditional reports state that the brain is only removed through the nose, research with CT scans shows great variability.

“Until relatively recently, the historical accounts were accepted as gospel, but scanning Egyptian mummies has challenged these ideas.”

The head was found in an attic in Kent. (Credits: MTW Hospitals/SWNS)

Craig Bowen added: ‘This project is part of a larger goal of preserving the head and showing it to the public in conservation grade packaging.

“The conservation process also allows volunteers to experience and participate in important discussions surrounding the conservation, registration and study of human remains.”

The head is being preserved by professional archaeological restorer Dana Goodburn-Brown ACR, who is also coordinating the research efforts.

As part of a joint scientific study of the head, experts from Canterbury Christ Church University, University of Kent and University of Oxford will attempt to reconstruct the history of the individual.

The group hopes to present the findings to the public in the near future at the Beaney Museum in Canterbury.

Ms Goodburn-Brown said: ‘I feel privileged to provide care, analysis and liaison with specialists in the multidisciplinary team.

“Through our carefully conducted research, we hope to gain a better understanding of who the head belonged to and provide proper care for their remains.

“Consistent with the promotion of Science, Technology, Engineering and Mathematics (STEM), the Beaney Museum will use the application of modern technology with history to enhance learning, increase appeal, and increase school attendance and reach.”

Ritchie Chalmers, Head of Clinical Core Services, said: ‘It is very exciting that Maidstone and Tunbridge Wells NHS Trust are involved in this project.

“It’s great to see how modern technology can help bring ancient history to life. I, along with the rest of the trust, look forward to finding out what the CT scan reveals.”

This individual’s CT data will help understand the broader picture of mummification and will be shared with the IMPACT Mummy Database hosted by Western University.